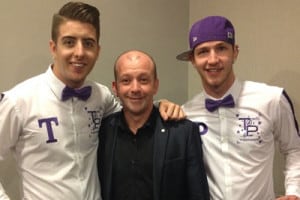 Will Gray with Twist and Pulse

Last night I performed for The Walkers Crisps company at their 75th anniversary party night which was held at the amazing Hilton Double Tree hotel in Lincoln.

There were over 200 guests and alongside the Band, photo booth, caricaturists, jugglers, stilt walkers and myself there were also the Britain’s got talent runners up  from 2010 Twist and Pulse who have now gone on to be one of the top street dance acts in Britain with their own streetomedy style dancing.

To learn more about Twist and Pulse, where there touring and what their doing now click here.


History about Walkers crisps
In the 1880s, Walker moved from Mansfield to Leicester to take over an established butcher’s shop in the high street. Meat rationing in the UK after World War II saw the factory output drop dramatically, and so in 1948 the company starting looking at alternative products. Potato crisps were becoming increasingly popular with the public, leading managing director R.E. Gerrard to shift the company focus and begin hand-slicing and frying potatoes.

Walkers factory in Swansea, Wales
The Walkers logo, featuring a red ribbon around a yellow sun, is noticeably similar to Lay’s. It derives from the Walkers logo used in 1990. The company is still a significant presence in Leicester. Gary Lineker, the Leicester-born former footballer, is now the face of the company, featuring in most of their advertising campaigns since 1995’s “Welcome Home”. In 2000, Lineker’s Walkers commercials were ranked ninth in Channel 4’s UK wide poll of the “100 Greatest Adverts”. The official website states that an estimated “11 million people will eat a Walkers product every day”. The company employs over 4,000 people in fifteen locations around the UK.

Book a magician in Lincoln