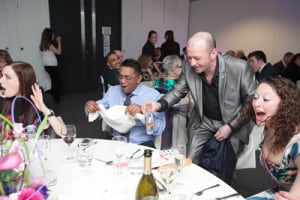 On Thursday 13th of March, Sparky and I took to the road to perform for one of our biggest corporate clients Ashfield Healthcare who are based in the Midlands area just off the M42 near Ashby De la Zouch. After performing at their corporate dinners the last four years it was time for something different and one thing they’d never seen was the magic Goldfish.

He doesn’t perform very often and usually only at corporate events throughout the year and this was no different. On this occasion I worked the drinks reception on my own while Sparky relaxed in the green room and then me and Sparky performed around the tables during dinner. You can imagine the astonishment at every table when he appeared from someone else’s jacket sleeve the guests were truly amazed as you can see from the photos! 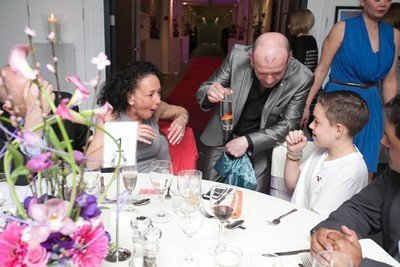 A few facts about Goldfish

1. The collective noun for goldfish is known as “a troubling”

2. Goldfish can tell different peoples faces apart and are able to distinguish between different shapes, colors and sounds.

4. Goldfish can’t close their eyes, Goldfish have no eyelids, so they have to sleep with their eyes open!

5. Goldfish have been kept as pets for over 2000 years, Keeping pet goldfish dates all the way back to ancient China!

6. The metabolism of a goldfish will slow down significantly in cold water, almost like they are hibernating. This means that goldfish can survive in very low temperatures, sometimes even in ponds that have frozen over for the winter!

7. Goldfish can get used to humans and will eventually stop considering them a threat. This can make it possible to feed your goldfish by hand!