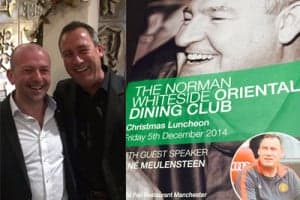 December with a Manchester United Legend.

I perform many parties through the year in Manchester but not always for a Manchester United Legend and none are as fun as the first one of December.I was booked again by good friend Norman Whiteside to perform at his Annual Christmas oriental club Luncheon for his 200 invited VIP guests where I had the privilege of meeting Guest speaker Rene Meulensteen.

This is always a fun start to the December madness, if you’re having a christmas party in Manchester please don’t hesitate to get in touch so I can advise how I’d make your event a day to remember.

1. At 16 he became the youngest player to ever step out for Manchester United.

2. At 17 years and 41 days, still not legally able to purchase a drink from his local off-licence on the Shankill Road in Belfast. He displaced none other than Pelé as the youngest footballer in World Cup history.

3. AC Milan offered a fee of £1.5 million for Whiteside which was a lot of money, too much in fact, for United to resist, but Whiteside rejected the opportunity to move without a second’s thought.

5. In 2015 Norman got married to Dee and had magician Will Gray perform at their wedding.