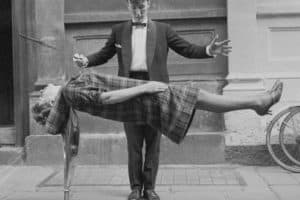 Blink and you’ll miss it: How magicians fool their audiences.

Magicians fool their audiences by unwittingly causing them to blink at key moments in a show, research has revealed.

One of the oldest tricks in the illusionist’s book is to relax members of an audience so that they lose concentration and fail to spot “secret actions”.

But a big reason why this strategy works is that relaxing attention leads people to blink, psychologists have learned.

Just as a performer’s quick hands are setting up the next jaw-dropping feat of magic, most of the audience will have their eyes closed.

Previous research has shown that blinking frequently occurs when attention is lowered, for instance during pauses in conversations and at the end of film scenes.

The new study involved showing volunteers film of world-famous American magician Teller performing a trick in which he appears to produce coins from thin air.

During the illusion Teller carried out several “secret actions”, which were found to coincide with participants blinking.

Psychologist Professor Richard Wiseman, a former professional magician and member of the Inner Magic Circle, who co-led the research, said: “Magicians know when audiences are allowing their attention to dip and that’s when they do secret things that are likely to go unnoticed.

“What’s surprising, and what even magicians didn’t know, is that the majority of the audience are blinking at those precise moments.”

A common tactic is to make the moves necessary to set up an illusion at the end of the previous trick, because that is when audience attention is known to slip, he said.

Other attention-relaxing moments occur when people laugh or clap.

Generally, performers will try to make their whole show as casual and relaxed as possible in order to prevent spectators paying too much attention to what they are doing, said Prof Wiseman, who is based at the University of Hertfordshire.

He said young children can be a problem because they do not relax their attention in the same way as adults.

“Often a kid will spot something when an adult won’t,” said Prof Wiseman. “You’ll hear a voice shout out: ‘hold on a sec, I can see a rabbit poking out of your jacket!’

“You can allow for that when performing in front of a whole audience of children, but family audiences which include children and adults are quite tricky.”

The new research is published in the journal PeerJ.

A total of 20 volunteers, 10 male and 10 female, took part in the study, which involved watching the Teller trick Miser’s Dream.

At the start of the performance, Teller invites a member of the audience to come on stage and hold a glass jar. Teller then conjures a number of large silver coins from the air and the audience member’s clothing, each of which is dropped into the jar.

For the finale, the coins are placed into a large tank of water and magically transform into goldfish.

Two magicians recruited for the study independently identified moments when Teller secretly picked up coins from a hidden location. In total there were seven “secret actions” which occurred when audience attention was likely to be relaxed.

Analysis of participants’ eye movements showed that four of the seven secret actions were closely associated with “synchronised blinking”.

But the onlookers tended not to blink when being shown the “seemingly impossible effects” Teller wanted them to see, such as materialising coins or turning coins into fish.

The scientists wrote: “These findings are likely to be of interest to magicians, and may even inform the performance of magic.

“Although magicians understand the importance of performing secret actions when an audience relaxes their externalised attention, they have no easy way of discovering when such moments occur.”

The above article was taken from The Irish Times