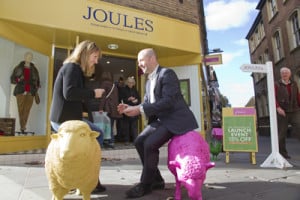 I was asked by Joules to entertain the queues at their new store that was opening in Worcester city centre from 8:00am (I thought they were mad who’s going to be there that early). They knew what they were talking about, On a cold Wednesday morning (and I mean cold) the first person in the queue was a lady named Pat, she had started queueing from 3:00am that morning just for an £100 voucher (crazy).

I then spent the next five hours entertaining people with close up magic while they queued to enter the new store. I’ll be honest it looked very much like all the other Joules stores I’ve been in. 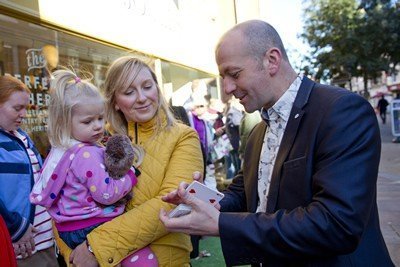 A bit of history if you didn’t know….
Originally established as Joule & Sons in 1977 by Ian Joule, his son Tom took over the business in 1989. Joule & Son originally sold branded clothing and accessories at equestrian and country shows. Seeing a gap in the market for colourful country clothing as an alternative to traditional styles, Tom got 100 pairs of pink wellington boots manufactured. These sold out almost immediately.


In 1994 Joule and Son rebranded as Joules. Tom was selecting and selling branded goods at minor fairs and by 1997 had done even better selling known outdoor clothing brands at the bigger shows. It was around this time that Tom Joule was inspired to create his own clothing collection and in March 1999 he sold the first shirt under the Joules brand on his own stall. In September 2000, Tom opened the first Joules store next door to the café owned by his father in Market Harborough, Leicestershire. The company remains based in Market Harborough.