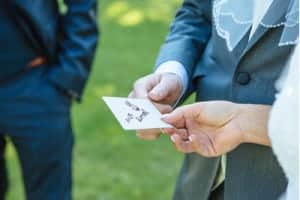 As a wedding magician I love performing at weddings and this weekend was no exception. I had the honour of performing for Sam & Steve Rutter and their wedding guests at one of my favourite venues Haslington Hall.I performed during their champagne reception in their beautiful gardens at Haslington Hall. I hope they’ll be very happy. The manor of Haslington was acquired by the Vernon family as a consequence of the 14th-century marriage of Sir Thomas Vernon to Joan Lostock, heiress of Haslington. The house was built by Admiral Sir Francis Vernon in 1545, and contains parts of the original medieval manor house, which are said to date back to 1480. Additions and alterations were made to it in the 16th, 17th and 19th centuries. It is claimed that some of the timbers used in the early phase of construction were salvaged from ships of the Spanish Armada in 1588. In the late 19th century it was a farmhouse. In 1931 extensive repairs, alterations and additions were made. 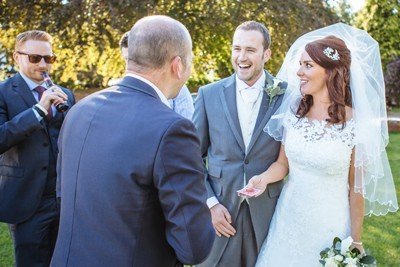 Set in the heart of Cheshire overlooking the borough of Nantwich and Crewe this building dates back to the 1480s and is the perfect setting for anyone to get married.