For the sixth year running I was invited to the FFFF Convention in Buffalo, New York, which is an invitation only magic convention for the top 200 magicians in the world.

Each year theres a guest of honour this year was Shawn Farquhar who’s a three time world champion of magic at FISM.

The Fechter’s Finger Flicking Frolic (FFFF) convention is the “Original Close-Up Magic Convention” and the most prestigious gathering of close-up magicians in the world. Since 1971 it has been a By-Invitation-Only event.

Commonly referred to as the 4F convention, It was started in April 1971 at the famous Forks Hotel in Buffalo, New York by Eddie Fechter, Bill Okal and “Obie” O’Brien, who decided that it would be nice to have a convention dedicated strictly to the art of close-up magic.

Beginning in 1977 every convention was dedicated to a single “Guest Of Honor” for his contributions to close-up magic.

This year I was asked to perform on the opening gala show, which no other British magician has EVER been asked to do it was a privilege and an honour to do this and really look forward to going back next year. 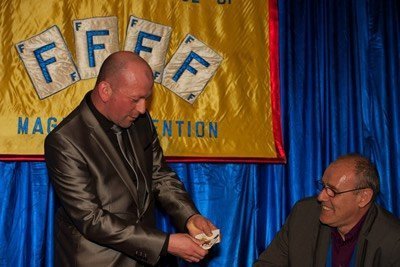