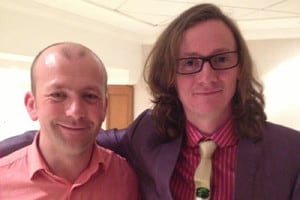 Corporate event at The Hilton NEC

It was great fun last night working a corporate event at the Hilton Metropole Hotel in Birmingham, I was performing at the HIBU’s business awards dinner this is the company that was formally known as Yell until 2012, it was great entertaining all the staff, managers and their guests.

It was also great to meet and work along side comedian Ed Byrne after I’d finished entertaining around the fifty tables it was time for Ed to take to the stage he did a forty five minute spot and was very funny and not one person left the room while he was on (maybe scared to) but he stormed it as usual.


Ed Byrne was born 16 April 1972and is an Irish stand-up comedian, voice over artist and actor. He has presented television shows Uncut! Best Unseen Ads and Just for Laughs, and is a guest on television panel games. As an actor, he played the title character in the 2000 ITV adaptation of the pantomime Aladdin.

After building up his act on observational comedy, Byrne was nominated for the prestigious Perrier Comedy Award at the 1998 Edinburgh Festival Fringe.