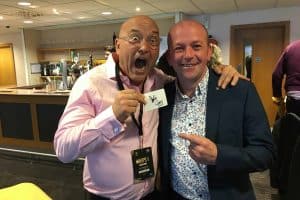 Working regularly as Wasps match day magician I get to meet lots of interesting people as well as many celebrities. Recently while performing in the directors board room I had the pleasure of performing for none other than Master Chef’s Greg Wallace.Surprisingly Greg loves magic almost as much as Wasps RFC and food.

As I’ve already mentioned I get to meet and perform for many celebrities. While working at corporate dinners and awards banquets all over the country I’m always asked with interest about famous people. 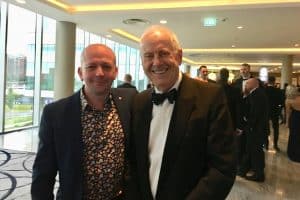 Well guess what thats just what they are people but we all tend to know them. Most of them in my experience are nicer than normal guests.

Meeting Gyles Brandreth at an event in London was great turns out he’s a massive fan of magic and a throughly nice guy.

Myself and Lee (the Pickpocket) Thompson also met Phillip Schofield at the British GP, another celebrity thats a normal person. He was surrounded by people but was never funny about signing autographs or having his photo taken, 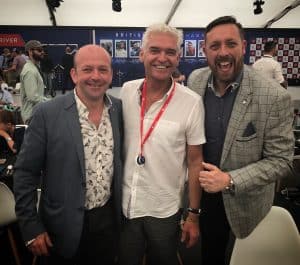 We had such a laugh with Phil (as he’s known to his friends) but couldn’t quite steal his watch but we did get his wife’s.

My advise is if you see a celebrity you’ve always wanted to speak to go and speak 9.5 times out of 10 they’ll be happy to chat.